Years of robust population growth and subdued construction could help Phoenix hang on in a post-pandemic world to its status among the U.S. cities with the most opportunity for retailers. While observers expect some pain for the market through the first two or three quarters of 2021, it’s unlikely to match the fallout from the Great Recession.

Back then, Phoenix’s population growth plummeted to 49th in the nation from No. 2, and the resulting collapse of retail leasing and closures of stores left Phoenix with a glut of speculative shopping center space. The average vacancy rate rose from around 8.5 percent midway through 2008 to more than 12 percent in 2011. But demand for Phoenix living and appealing long-term employment prospects once more are attracting new residents. From mid-2017 through mid-2018, Phoenix’s population grew nearly 25,300, making it the fastest-growing city in the nation. As a result, the vacancy rate fell back to 8.5 percent in the fourth quarter of 2019, according to Cushman & Wakefield, though it since has ticked up 30 basis points amid a falloff in leasing, according to a preliminary third-quarter reading.

Still, people are still flooding into Arizona and into the Phoenix area in particular, especially from the West Coast, says Taylor Alvey, vice president of leasing for Vestar, a shopping center developer based in Phoenix. What’s more, it has been the stores that already were limping along for the past several years that are responsible for much of the recent rise in vacancy. “The pandemic was the catalyst that they couldn’t come back from,” he said. “Success still comes down to the real estate and merchandise mix, and a lot of boxes and shop space are in good centers and in most cases are at under-market rents.”

Mixed-use centers and traditional, small-scale suburban neighborhood centers made up the bulk of new supply over the past several years. More recently, attention has shifted even more toward suburban centers, said Cushman & Wakefield senior director of retail services Brent Mallonee. “If you had to pinpoint where we’ve seen some negative impacts of COVID, it would squarely be on infill mixed-use projects. Enthusiasm has lessened for those,” he said. “But suburban projects have gained a little steam and momentum as people view them as a little safer.”

An abundance of affordable land has driven residential expansion on all sides of Phoenix, says Kidder Mathews first vice president and shareholder Jenette Bennett. Some of the hottest suburban growth markets in the area, she says, are Goodyear, Surprise, Laveen Village, Gilbert and Queen Creek. In particular, these communities are benefitting from years of limited new supply, as well as new and expanded traffic corridors that have made commutes relatively painless, she says. Nearby Buckeye also is primed for retail growth.

Positioned for retail expansion: Buckeye
The population in Buckeye, one of the most westward suburbs of Phoenix, grew as much as Phoenix’s, 8.5 percent, from mid-2017 through mid-2018. Buckeye’s population reached 74,370 at the end of that period, but it’s expected to surpass 100,000 in 2021. Only 5 percent of Buckeye’s 640 square miles is built out, and city officials anticipate much more growth. And Buckeye has only 16.5 square feet of retail per capita versus 42.3 square feet in metro Phoenix, according to Buckeye Economic Development. “Lots of housing is going up, and they’re going to need more retail,” said Orion Investment Real Estate vice president Michael Achtman. “It will definitely come. There is a lot of land in Buckeye, which allows you to spread out.”

With its proximity to California and Mexico, Buckeye benefits from a booming industrial sector that is driving employment, particularly along the nearby Arizona 303 corridor, says Cushman & Wakefield senior director of retail services Brent Mallonee. Meanwhile, a retail corridor comprising grocery-anchored centers, a power center and strip centers has emerged along Interstate 10 in Buckeye, and a handful of development opportunities remain.

“With all the new housing and industrial growth happening in and around Buckeye, retail will eventually follow,” added Vestar vice president of leasing Taylor Alvey, “but it still has a ways to go compared to other pockets in Phoenix.”

Among other leases, Mavrix — a local bowling, laser tag, arcade and food-and-beverage concept — opened a 45,000-square-foot location at The Pavilions at Talking Stick in central Scottsdale in late 2019. Scandinavian Designs opened a 45,351-square-foot furniture store in North Scottsdale earlier in 2019. Urban Air, meanwhile, has delayed the opening of a 50,000-square-foot entertainment center at SanTan Pavilions in Gilbert.

While large and boutique fitness operators have opened in Phoenix to take advantage of the physically active population, bigger gyms recently paused expansion, Alvey says. Boutique gyms, though, continue to open, as do food-and-beverage concepts that feature large patios for games and other outdoor activities, he says. “Restaurants is a lot of our new leasing activity right now,” pointed out Alvey, whose firm owns 18 Phoenix-area properties, including Desert
Ridge Marketplace and Tempe Marketplace. He also noted a pickup in interest from national big-box and junior-box retailers this fall. 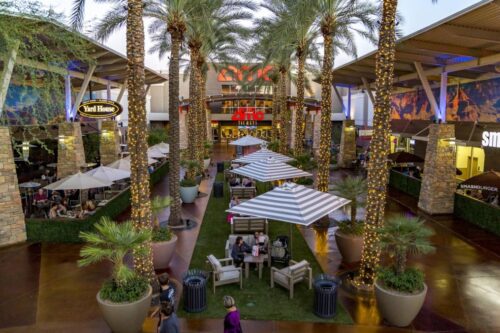 Desert Ridge Marketplace
About 446,000 square feet was under construction in the third quarter of 2020 in greater Phoenix, according to Cushman & Wakefield. A Life Time fitness in the Peoria submarket, a Fry’s grocery-anchored center in Gilbert and a Fry’s grocery-anchored center North Buckeye made up the bulk of the development. In March, Life Time opened a 105,000-square-foot Diamond-level athletic club built on a parking lot at Macerich’s Biltmore Fashion Park mall in Phoenix.
Phoenix rental rates ended 2019 at $15.23 per square foot on a triple-net basis, a year-over-year increase of 3 percent, according to Cushman & Wakefield. Since then, however, they have declined about 50 cents per square foot. When compared with pricier markets in California, these rates benefit retailers and investors alike, say Bennett and Alvey. “Rents have certainly increased over the last three to five years, but they aren’t so high that they’re stifling growth,” Alvey explained. “It does no good to get top-of-the-market rents if the concept can’t sustain them. Then you’re just cycling through tenants.”