You Can Now Stroll This Arizona Mall with Beer, Wine or Hard Drinks in Hand 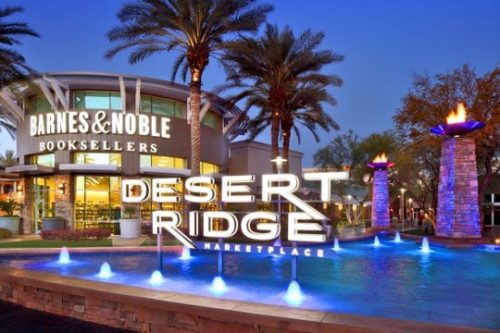 Until now, you could enjoy a beer or glass of wine at your favorite shopping mall restaurant or bar — but, except for occasional special events, not in the shopping center itself.

That prohibition is ending in Arizona, meaning you will be able to stroll through certain shopping centers with an alcoholic beverage in hand pretty much any time they’re being served.

A bill passed by the Legislature and signed by Gov. Doug Ducey in April created a pilot program in which mall owners working with an on-site restaurant can offer alcoholic beverages for consumption throughout the common areas of the mall property.

Shopping-center owners call it one more innovation to keep their properties popular with consumers.

“Shopping centers need to be relevant — people just can’t be shopping,” said David Larcher, president of Vestar, the company that owns Desert Ridge Marketplace. “Malls need to be destinations, and food, beverages, entertainment and art are all part of that.”

Desert Ridge Marketplace in north Phoenix becomes the first shopping center in Arizona to take advantage of the new law. As of Nov. 1, patrons ages 21 and up visiting the mall may buy beer, wine and other alcoholic drinks at an outdoor kiosk operated by Copper Blues Live, a Desert Ridge tenant. A permanent bar, the “Copper Cantina,” will follow early next year.

It’s not clear if malls elsewhere around the nation have similarly relaxed rules for common-area alcohol consumption. A spokeswoman for the International Council of Shopping Centers said the group doesn’t track state-level liquor regulations affecting malls.

Tempe Marketplace, also owned by Vestar, has an application pending for a similar service, Larcher said. Vestar spearheaded the effort about a year ago, meeting with local and state officials and hiring a lobbyist to promote the legislation.

Vestar operates shopping malls in nine other Western states. Larcher, who said he thinks this is the first such law in the nation, predicted common-area liquor sales could spread to other states based on Arizona’s experience.

The Arizona legislation, H.B. 2281, creates a three-year pilot program that allows the owner or manager of a regional shopping center to designate one restaurant or bar with a liquor license to apply for the extended service. Patrons are allowed to “consume spiritous liquor throughout a designated pedestrian area,” according to the legislation, which was sponsored by Rep. Jeff Weninger, R-Chandler, and passed both legislative chambers by an overwhelming majority.

Ryan Handelsman, head of marketing for the company that owns Copper Blues Live, said customers at Desert Ridge will be served in special plastic cups and will be given wrist bands to verify their eligibility. Extra security will be provided, and patrons won’t be able to take their drinks into the parking lot or outside the mall. 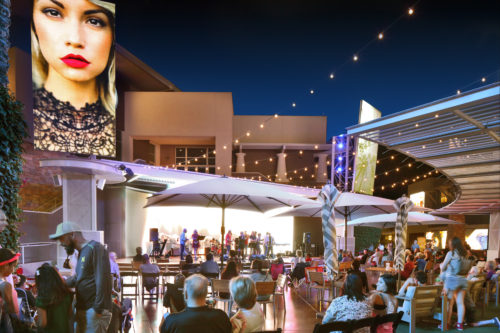 Only one restaurant or bar per mall can offer the extended service so that officials at the Arizona Department of Liquor Licenses and Control can more easily track compliance and potential problems.

Malls including Desert Ridge have been able to serve alcohol in enclosed areas at special events. “Why not make it a permanent situation?” Larcher asked.

Copper Blues this weekend plans to operate the kiosks Fridays from 3 p.m. to midnight, Saturday from noon to midnight and Sunday from noon to 8 p.m., with slightly different hours to follow. The Copper Cantina will offer about a dozen drink options, Handelsman said.

The new law allows up to 10 malls to apply for the extended service. Only larger shopping centers with at least 400,000 square feet of retail space — the ones with more extensive pedestrian areas — are eligible.